You are viewing a preview version of this site. The live site is located at: https://jewishindianapolis.org

Purim falls on the 14th day of the Jewish month of Adar, usually in February or March. In leap year (there are seven leaps years occurring over a 19-year cycle), an additional leap month of Adar I is added. In these years, Purim is celebrated during Adar II.

Purim celebrates the salvation of the Jews of Persia from certain destruction. King Achashverosh's advisor Haman was offended when Mordechai, a Jew, would not bow to him, so he drew lots (purim in Hebrew) to determine a date upon which all of Persia's Jews would be killed: the 14th of Adar. Mordechai's relative Esther entered and won a contest to become Achashverosh's new queen after his first wife Vashti was thrown out of the palace, so she was able to use her influence to convince Achashverosh to condemn Haman and his plot.

Purim is a festive and joyous holiday. Many people dress up in costume to attend Purim carnivals, and when the megillah (scroll) is read aloud, noisemakers called groggers are shaken every time Haman's name appears. Other customs include enjoying a large meal, giving gifts to the poor, and sending ready-to-eat food (mishloach manot) to friends, often including hamantaschen ("Haman's pockets," "Haman's hat," or oznei Haman [Haman's ears] in Hebrew; triangle-shaped pastries filled with poppy seeds, jam, or even chocolate/Nutella).

Find Out More at MyJewishLearning 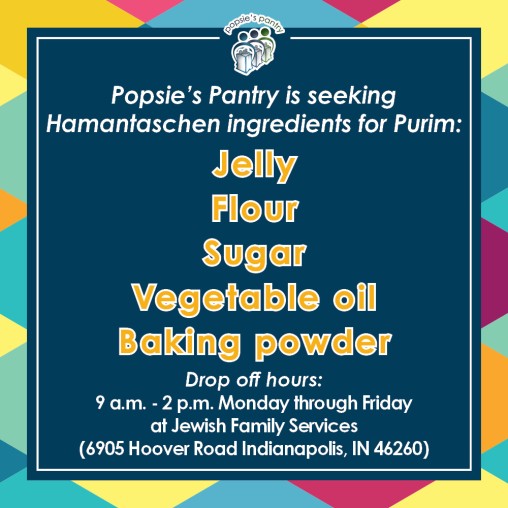 Indianapolis's local synagogues & organizations offers a wide variety of resources and support to help make your Purim fun and meaningful. Below you will find contact info for synagogues as well as a curated list of resources to help you perpare for and celebrate Purim at home this year.

For those with young children (or for the young at heart!), PJ Library offers a variety of holiday related books, crafts, playlists, recipes and more to inspire your at home celebration.

Celebrate the heroism of Esther by celebrating Jewish women! The Jewish Women's Archive features stories and biographies of Jewish heroines throughout the ages.

Looking for Purim Learning? - From the Pardes Institute of Jewish Studies, their Purim Challenge runs from Feb. 15-26. Download the Pardes Daily app for podcast-based learning leading up to and through Purim.

The Judaism Unbound podcast is offering workshop series to help you "flip the script" on Purim and enhance your at-home celebration. Choose from a one session or two session track beginning on February 9th.

Looking to eat your way through Purim? Connect with a variety of Jewish traditions and experiences through family stories and shared recipes. The Jewish Food Society offers a collection of Purim-related topics to enjoy.

Want help bringing full joy to this Adar or looking to increase resilience and find hope at a time when we need them most? Check out the next Day of Gratitude series coming up Feb 14-16. This journey continues monthly leading up to Shavuot so join today!

Looking to take the Megillah on-the-go? Check out the Sefaria app for a free library of Jewish texts right in your hand. Purim features include a smartphone grogger and the "emoji megillah"